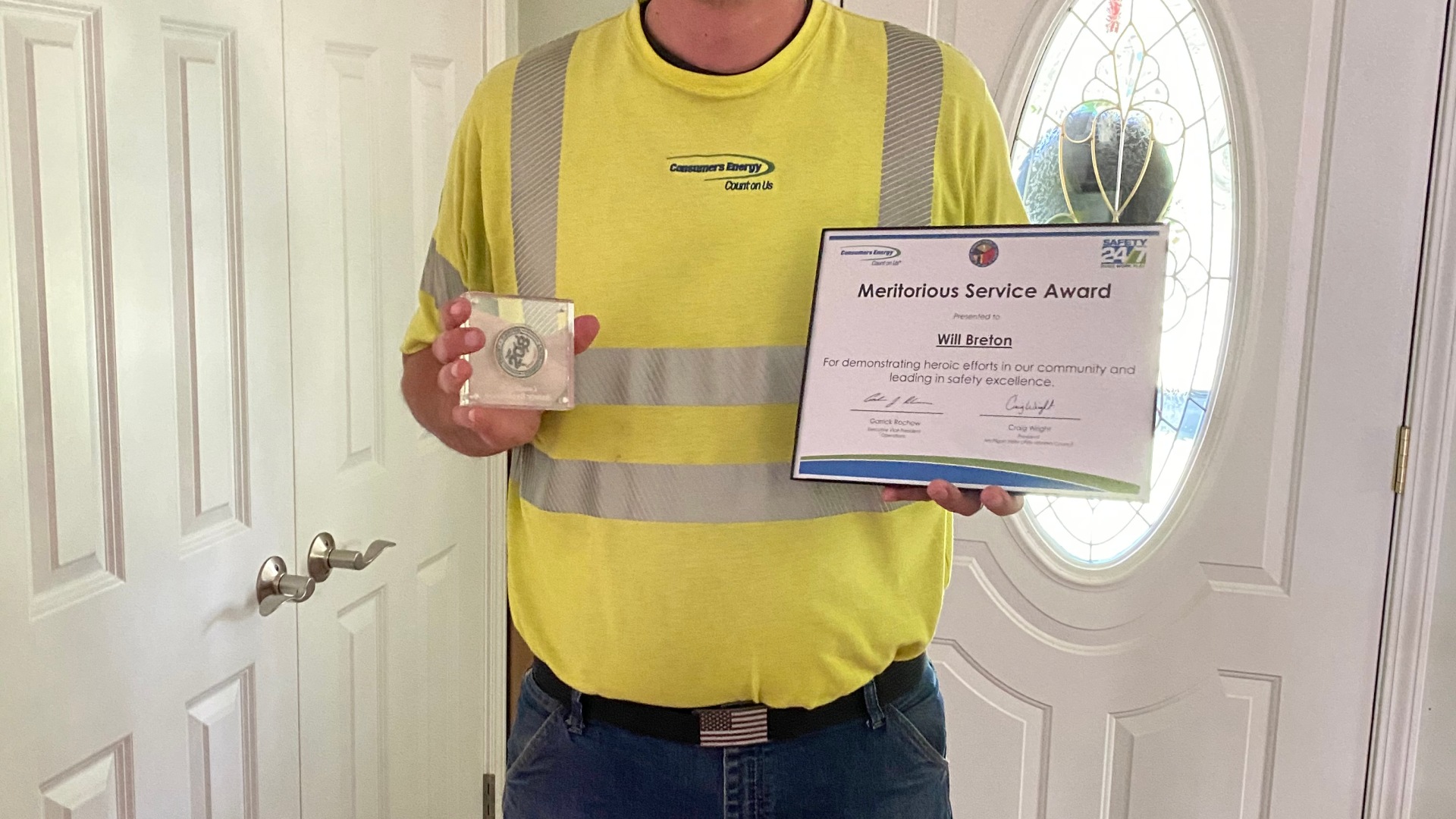 Sitting attentively at his desk in his fourth-grade classroom in the early 1990s, Will Breton made a life-changing decision: he wanted to be just like the man in front of the chalkboard.

The man was passionately talking about his job at Consumers Energy. Breton still remembers vividly how the man described himself – with great pride — as being the “eyes and ears” within the community and took his role seriously about helping people in need.

Breton hung on his every word. He was hooked.

And he has become that person he admired four decades later. He was involved in two dicey situations where he’s helped people since he started with the company in 2011. His most recent heroic effort was recognized with a Meritorious Service Award presented to him by company and union leaders.

Being Ready
“You never know when it’s going to be your turn to help somebody,” said Breton, a Union Safety Representative in Gas Operations, who while on the job in 2012 saved a person and their dog from being attacked by two other dogs. “You just have to be ready when it’s your time.”

Earlier this summer, Breton was thrust into that position once again.

On June 23, Breton was driving up a hill on M-37 north of Hastings just before 9 a.m. he saw something in the road next to the yellow line.

“I thought it was a dog,” he said. “But then I saw it dart from the road into the driveway and then I realized and was completely shocked… it was a little kid.”

Breton slowly stopped his truck, put his hazard lights on and blocked the partial northbound lane to make sure the little boy was alright.

The little boy – who Breton estimated to between 2 to 3 years of age – started crying and started to run at him. Breton dropped to his knees and the little boy latched on to him and wouldn’t let go.

After unsuccessfully trying to find out from the boy where he came from – he called 911 and explained the situation to a dispatcher.

“I didn’t want anybody to get the wrong idea that I was trying to kidnap him or anything,” he said. “I didn’t want to make a potentially bad situation even worse.”

When a Michigan State trooper arrived, he asked Breton if he was good watching the little boy since he didn’t want to let Breton go. Breton said he was fine, as the trooper explored a nearby home.

After some time investigating around the home and knocking on the door, the trooper saw something, according to Breton. He knocked harder at the door and a woman opened it.

After a few minutes talking with the woman, the officer signaled him to come up to the porch then handed him to the woman.

“I asked if I needed to stick around, but the officer said that he would handle it from there,” Breton said. “To this day I am not really sure what happened. I’m just glad the kid was alright.”

“Until this happened, I really hadn’t bought into the virtual tailboard, I thought it was a waste of time,” he said. “But after going through this, my mind has changed big time. It’s about being alert to your surroundings and putting yourself in the best possible position to help somebody in need out. Luckily for me, I was able to draw on this tool. I will never doubt it again.”

Breton said what also struck him about the situation, was that it was a busy highway and nobody else stopped.

“It just bothered me that people would just drive by,” he said. “Maybe they didn’t want to get involved? I don’t know — but if that’s how society treats a little kid in trouble, that’s a problem.”

Breton said he doesn’t consider himself a hero, it’s just part of his job working for Consumers Energy.

“In both cases instinct just took over,” he said. “I’ve always had the ability to separate myself from the situation and not get caught up in the emotions.

“I hope to never have to go through something like this again. But if it happens, I will be ready.”