Two red foxes have retained their beautiful — and essential — fur coats thanks to the care and commitment of Consumers Energy employees working on the South Oakland Macomb Network project.

The employees noticed the foxes appeared to be suffering from mange, a skin disease caused by mites that results in fur loss and eventual starvation. It causes eyes to crust over and constant itching which prevents foxes from hunting. The disease is unfortunately widespread among Michigan red foxes and typically kills them within two to four months of infection.

A full-time environmental consultant, Adam Fisher, was an integral member of the project team. He and other pipeline employees took continual care to help protect foxes and other animals they encountered, including preserving critical red fox winter denning habitats during construction and restoration work.

Other efforts included safely relocating garter snakes, installing “turtle fence” to prevent protected reptiles from entering work areas, scheduling tree-cutting in winter to avoid harm to bats, and protecting an active woodcock nesting area located within the pipeline path until the babies fledged. The project also plans to create 1.5 acres of butterfly and honey bee habitat reserve in the spring of 2020.

“Pipeline crews are generally pretty tough due to the nature of the work, but they also have tender hearts,” Fisher said. “They accepted the red foxes as mascots on this project. Any time someone saw one they let me know. The foxes were curious and often checked up on us, our equipment and even the pipeline itself before it was installed.”

Fisher said the team became concerned when two foxes began losing large areas of fur and suffered frightening weight loss. Fortunately, the team was able to implement a mange treatment program recommended by a Michigan Department of Natural Resources-licensed wildlife rehabilitator. It required two doses of medication 10 days apart, which was inserted into enticing food. This effort required continuous direct monitoring during feeding attempts to make sure only the foxes received the medication.

Project-installed trail cameras and visual sightings provided the wonderful news that treatment efforts resulted in the regrowth of fur coats and fluffy tails for two of the project’s favorite foxes.

“We were happy to play a role in helping ensure that at least two of these beautiful animals are healthy going into the cold winter months. For these two foxes you can definitely say fur is back in style!” Fisher said. 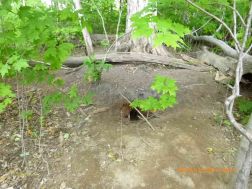 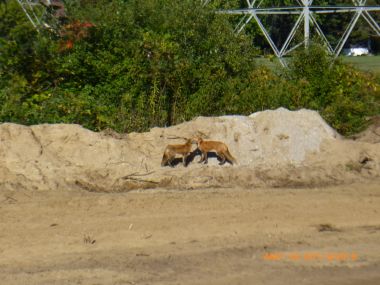